Congratulations to our February Athletes of the Month Ameer Lawrence and Joe Vessely!

Joey had 1 goal and 3 assists in the 4 game Junior Varsity Illiana League Playoff which was won by BNI over Lake Central 4-1. He was the top center contributing offensively and defensively. Joey was also  effective as a top player with the Varsity in their run in the Roper Cup, coming within a few goals from qualifying from the Championship game. On the season with the Varsity, as a freshmen, Joey had 8 goals and 10 assists for 18 points, good enough for top five on the team.

Ameer finished the season with the high average in the state at 239. He advanced to regionals for the 2nd year and was seeded third in the GLCC sectionals. He was also selected for the All-Conference Team for the 2nd year in a row as well. Ameer was also named The Post Tribune Bowler of the Year! 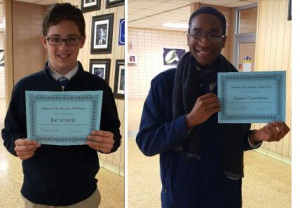