Congratulations to the boys varsity team as they take their third straight sectional title under Coach Anthony Hoolehan. The Warriors were able to overcome an early 1-0 deficit to defeat the Whiting Oilers by a final score of 3-2. The Warriors were paced by a dominant outing from Junior Ryan Bradtke on the mound. Ryan threw 7 Innings giving up 3 walks, while striking out 7 and surrendering just one earned run. At the plate Noll was paced by an RBI single from Senior Ryan Kielbania to tie the game at 1. Freshmen Richie Redding had two big stolen bases in the game, each time being driven in by Sophomore Devin Padilla. The second of those was a Walk-off Sacrifice Fly by Padilla to seal the 3-2 victory for the Warriors. This Sectional Championship is the programs 27th all time Sectional title, 3rd in a row and 8th in the last 10 years. The Warriors will face South Adams in game 1 of the Regionals this Saturday, June 2nd, at 10:00 AM. Championship game will be at 6:00 with the winner of game 1 taking on the winner of the Eastside vs. Boone Grove game. Oil City Stadium is locating at 1700 119th Street in Whiting, IN. Come out and give the Warriors your support. Good luck, God bless, and have fun! 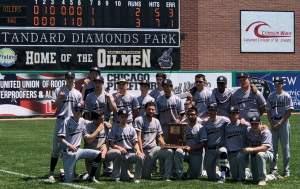