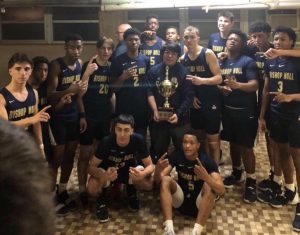 Being a student manager is one of the most essential, and also one of the most forgotten positions in a high school sport. I have been a part of Noll’s boys basketball program for three years. I was brought in by former manager and Class of 2020’s Valedictorian, Giovanni Komyatte. He needed help managing the team and asked me if I would give him a hand. Little did I know it would be one of the best decisions I’ve made in my life. I truly did not know what to expect when I joined the program my Sophomore year. I have been a part of a wild roller coaster ride, one that has allowed me to experience all the highs and lows in the program throughout the past three years and provided me with some amazing moments I’ll never forget.

When I became a manager, I did not consider myself a part of the team. I thought I did not deserve the varsity letter, patches, and accolades that would eventually occur. My only thought was that I am an unofficial member of the team, like someone behind the scenes who just helps his team out. I also thought I was just a fan who receives free things like a shirt or zip-up jacket. I soon realized it was much more than that when I was given a list of manager duties my sophomore year. It was my job to  check bins, film Junior Varsity games, record stats on the shot chart, and track rebounds and turnovers.

I always saw myself as an outlier who fits in, but never truly fits. However, being a part of the boys basketball team has completely changed the way I view myself. The team has helped me grow into someone new, giving me confidence and allowing myself to express things in different ways. They helped my “Warrior Pride”,which is something I was scared I would not fully have due to being a legacy student. One who is connected to five different families who attended Bishop Noll. The reason I was scared was due to the sheer thought I’d never leave my mark here at Noll and would be stuck in my family’s shadow. But clearly that has changed.

The team has accepted me for who I am, and I am glad to call them family. I was there for the highest of highs and the lowest of lows. I remember the back-to-back buzzer-beaters against Griffith my sophomore and junior year; with Jaelon Brooks hitting the game-winning shot to prevent overtime and then the following year when Brandon Scott hit another game-winning shot in OT after being down one with only a couple of seconds left on the clock. I remember beating Hanover Central my sophomore year to win the Conference Traveling Trophy and became Conference Co-Champions with Lake Station Edison. I remember the bad times as well, like the back-to-back Sectional losses against Andrean my sophomore and junior year, when we lost the Conference Traveling Trophy to Calumet High School, the identity crisis the team faced at the start of the 2017-18 and the 2018-19 seasons. I also vividly remember the games we dropped to teams we shouldn’t have lost to during those years. However, that’s what being a part of a Noll sports team is all about. Going through the ups and downs of a season together as a family.

That leads me to this year – the 2019-2020 season. We started the season under a new coaching staff, which brought on some changes, ones that also had an impact on me. Initially, I was put back to filming games. I also had to be the water guy for the first time ever. But eventually I went back to doing what I was comfortable with – statistics. We’ve also been up and down in the rankings with a lot of people doubting us. The thing that everyone tends to factor out is that we are still a great team despite what the record and losses show. A perfect example of this is when we won big road games against teams like the Griffith and Andrean for the Catholic Cup. Everything needs context, and I have been here for all of it. Sadly, this will be my last year with the team, because I am a Senior now. I never truly thought how fast this day would come, but it has. As we begin Sectionals against Thea Bowman, I am ready for whatever comes our way this week – win or lose.

I truly love this team with all my heart. I do not know where I would be if it were not for this team. They all mean so much to me, and knowing that I am graduating with Hunter Laurencik, Xavier Roldan, Matt Mabry, Troy Acree, Bakori Jones, Aaron Chance, and Jack Reardon is bittersweet. I got to see them evolve and grow as individuals. They also were some of the first people to see me as a part of the team and I can’t thank them enough for that. I also got to see them grow as basketball players as well, seeing them make incredible and memorable shots that will always be ingrained into my memory. They are great basketball players and teammates. The amount of emotion, passion, and talent packed into this team is astounding and overwhelming. I also have love for the young guys as well. They mean a lot to me and I am excited to see what they do once I leave. I also have to thank the coaching staff – past and present – for allowing me to be a manager and be a part of this team as well.

I would like to end off on this note, being a manager is amazing. It is not only about the bins, statistics, water bottles, and making sure everything is organized. It is also about the heart, the passion, the heartbeat of a team, and making sure everyone is okay. Although it brought on many challenges for me, it allowed me to connect with my peers on a deeper level. I am very grateful for it and it means so much to me that I am a part of this team. From the amazing times to the ugly times, I have loved every second of it. I take pride that I have been apart of this team for so long and it is going to hurt when I do say goodbye. I also would encourage other people to become managers. It is a blast and I highly recommend it. Being a student manager is essential to the team. Managers play a key role in the team’s success. And for me personally, it allowed me to leave my mark on Bishop Noll. I now know that I will not be forgotten.