Warriors Official Sponsor
Wally Kasprzycki, an All-American football player at Bishop Noll Institute, starting tight end at Northwestern University and longtime BNI assistant coach, has been selected for induction next year into the Indiana Football Hall of Fame.
Kasprzycki’s election was confirmed by former BNI head coach Mark Peterson, who nominated Wally for the honor.
“I’m very honored and humbled to be considered in the same company with all the great members of the Hall,” said Kasprzycki, a 1975 Noll graduate and lifelong Hammond resident.
“But I’ll be honest, when I heard the news, the first thing I thought of was I would be following in the footsteps of Jerry Vlasic, who started coaching at Noll when I arrived there (in 1971), and we pretty much spent 30 years together.”
Vlasic, the winningest football coach in Noll history, was inducted to the Indiana Football Hall of Fame in 1996.
As a Noll senior, Kasprzycki earned Parade Magazine All-American status in 1974, helping lead the Warriors to an 8-2 record in Vlasic’s first of many winning seasons as Noll head coach.
Kasprzycki brought his talents to Northwestern University, where he ultimately worked his way up to a starting role at tight end and earned three monograms. After graduating, he returned to Noll in 1981 to assist Vlasic on the Warriors’ coaching staff. He served as defensive coordinator on the Warriors’ 1989 state championship team and was a coach for 36 years, under eight BNI head coaches, before stepping down after the 2016 season to devote more time to his family’s restaurant business, the Cavalier Inn in Hammond.
“Even though he’s no longer coaching, he’s still giving and supporting BNI’s football program by providing Thursday team dinners to the team he loves,” current Noll coach Wayne Racine said. “He is the living example of what Bishop Noll stands for, a man that always gives out of the kindness of his heart.
“When he coached, he was always willing to help a young man grow to reach his potential as a player and as a man. I am humbled to know such a giant of a man, and I could not be happier for him on election to the Hall of Fame.”
Kasprzycki’s previous recognitions include induction in 1996 to the Hammond Sports Hall of Fame and in 2010 to the Bishop Noll Hall of Honor.
Peterson said Kasprzycki’s induction dinner is scheduled for Sunday, May 2, 2021, at the Avalon Manor banquet center in Hobart.
“I had the great opportunity to get to know Wally in his coaching days,” said Peterson, who coached at Noll from 2004 to 2006 and now is the head coach at Chesterton High School. “Stories abound about his coaching and playing days, but I am blessed to know him as a person.
“He’s a remarkable man, just a class guy, and very deserving and worthy of the Hall of Fame.”
Peterson also nominated Rich Raffin, a Chesterton product who played defensive back at Northwestern and will be inducted alongside Kasprzycki. Raffin, like Kasprzycki, earned three monograms playing football at NU.
At Noll, Kasprzycki was a three-sport standout, also excelling in basketball and track. But football was always No. 1.
“The game of football means so much to me,” he said. “I loved playing the game, loved coaching, loved the lessons learned, the camaraderie with teammates and even the camaraderie with opponents. I am truly honored for this recognition.” 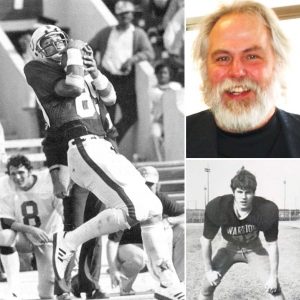